Its a couple of weeks now since I got back from my trip to the Lake District for a break and to visit Woolfest 2016, which is held in Cockermouth, a few miles west of Keswick in the heart of Cumbria. I talked about it quite a bit in Episode 12 of the podcast but I also wanted to add some notes and photos to my blog so that I have some memories to look back on.

Kirkby Stephen: in the East of the Lake District

I started out in the Eastern side of The Lakes in a small market town that I’ve never visited before. I chose it because it was a good stopping off point to an airbnb I’d already booked and I spent one night in a lovely historic cottage right underneath the church tower. Even though the weather forecast had said a 90% chance of rain the whole time I was away, this was one occasion when I was really pleased it was wrong. I hardly saw any rain until the last day – the skies were blue and the sun shone and it was actually quite hot…The first evening was lovely and I went on a bit of a walk to explore the town and soon found myself on a beautiful walk out along the river and up into rolling hills and green countryside. Just by the river was a sign with information for walkers doing the Coast to Coast walk, and very apt as it was exactly a year since I spent a week in Robin Hoods’ Bay. Although this was a warm, calm and tranquil evening, the landscape still bears the scars of last year’s floods. This small landslide happened last December, a local walker told me. The fence is carrying on regardless… Heading back to the town, everything apart from the Indian Restaurant and a couple of pubs were closed, which was a shame because this little cafe tucked away just by my cottage would have been perfect for a bit of afternoon tea. The cottage was very comfortable and I could quite easily have stayed a few more days and explored and walked more but my next destination was High Lorton, just 6 miles from Cockermouth and from the information on the airbnb website, it looked great. I was able to arrive early in the afternoon so I decided to spend the morning in Keswick. This is one of the ‘hub’ towns of the Lake District and its always busy. Its ages since I’ve been and I was pleased that the market was in full swing and that there were plenty of crafty and quirky shops to look around.

It was also time for a coffee so I sat outside and had a really good latte right in the centre of town.

The roads in the Lake District are not for the faint hearted as they are often single track and, in places, look more like tracks than roads as grass grows down the middle of them. Although the region is known for its lakes, the landscape into which the lakes nestle includes some substantial hills and fells, so some of the roads are steep as well as narrow.

I left Keswick and drove up the Whinlatter pass, which has some stunning views over to Bassenthwaite Lake. And when I arrived, the views from where I was staying were equally breath taking… this is the view from the middle of the garden. I had a small cottage with a sun room and sun terrace overlooking the view and this was part of a complex with three other holiday cottages. The new owner, Diana, who had bought the business only a few months ago, is busy making changes, including installing two wood fired hot tubs so that guests can relax in the tub while looking at this view of the heart of the Lake District… Having negotiated not only the Whinlatter pass but also several steep and winding single track roads and opened and closed farm gates (to stop the sheep straying) to get here I wasn’t in a rush to leave again until the next day. So I spent a bit of time spinning in the garden and then got out my crochet. Hooking away to this view late into the evening was a real pleasure – being midsummer it was still light enough to see until nearly 10pm. This is my Contour shawl using the pattern by Joanne Scrace and I’ll talk more about that in another catch up post. I think its nice to take away a crochet project to work on exclusively on a trip like this – now that I’ve finished the shawl it will always remind me of my first Woolfest and the gorgeous places I stayed in the Lakes.

Woolfest: and I shopped until I dropped!

But I’ll also save the photos and some of my memories about my day there to another post. I included a taster of the event in Episode 12 of the podcast.

A walk around Buttermere

The day at Woolfest went by in a flash but I felt that I’d seen everything I wanted to and decided not to go back for day 2. Instead I got up and packed, had breakfast and then made my way over to Buttermere along some more daredevil roads. Its possible to walk most of the way round this large and sheltered lake on a track that goes close to the water’s edge. The weather just about held out until I’d finished my walk but the rain did set in for the afternoon. I’ll definitely come back here though – such a peaceful place. 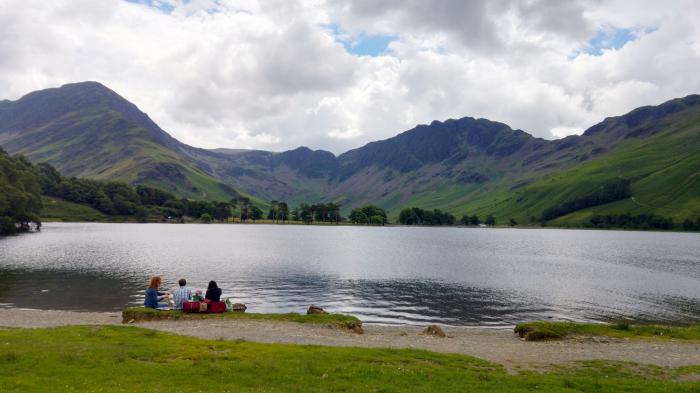 And over the Honister Pass through Borrowdale

In the early afternoon I headed back to Keswick and then onto Pateley Bridge for my final night away, ready for the next day’s bookbinding class. The high pass was glorious – just like you imagine when you read Lord of the Rings.