Note: so far you have made a circle. In the next round, you will add corners to turn this into a square.

Round 5: Using cream join the new yarn into any space between the treble clusters on the side of your square. A space between two treble clusters just after a corner is best. Make two chains. Then make two half treble stitches into the same space. In the next two spaces between the treble clusters on the side of the square make three half treble stitches. These are shorter, so will reduce the width of the sides of your square, making the shape a more precise square. *When you get to the corner, make two trebles into the space created by the two chain stitches. Then make two chains and two more trebles. On the next side, make three half treble stitches into each space.* Repeat from * to * until you have gone all round the square. Join to the second chain of the first stitch with a slip stitch and fasten off and weave in the ends. A quick overview on joining the squares 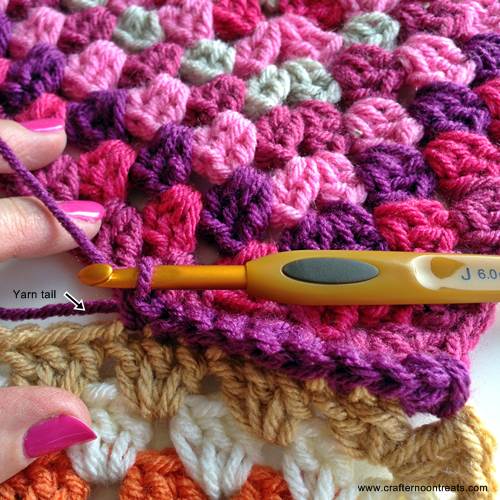 To attach this to the bag, I made holes 8 mm apart along the top hemmed edge with an awl, then used plum coloured embroidery thread, used with all 6 strands, to make blanket stitch all around the edge. I then used Stylecraft Special DK in plum to add a single round of double crochet.

Then a final round to make the base for the handles. On the side square of the bag, in my case the pink and plum square, I put a stitch marker three stitches from each end. When i got to the stitch marker, instead of carrying on around the top of the bag, I made 50 chain stitches before rejoining and continuing around the bag ends. I did the same at the other side.