I’ve had lots of lovely compliments on the edging I chose to do on my cosy stripe blanket, which I have found very encouraging. It was last year at this time that I picked up a crochet hook again after a 25-year break and its great that there is now such a community of other crocheters on Facebook, Instagram and on other blogs.

This is a descriptive post about my border, rather than a tutorial. If you can crochet enough to do the blanket, my border is very easy and I would be happy for anyone who wants to do a similar border to take whatever inspiration they like 🙂 Note that this is written in UK crochet terms. In the US, a double crochet is termed a single crochet, a treble is a double crochet and a half treble is a half double crochet.

The granny edging is my own thing and I am pleased that it makes my blanket unique, even though it is similar to all of the others in Lucy’s crochet-along. Lucy used meadow in her edge – my least favourite Stylecraft DK colour so I was never going to use that. But I did like the style of her border and my edge of the edge is pretty similar.

The first rows of edging

My first step was to use a low-key colour to go all around the blanket in treble doublets. I chose plum and made two trebles into one stitch of the previous row and then missed a stitch, and so on. For the sides I did two trebles into each row, so two doublets into each colour stripe.

I found that very tricky and my sides were quite wobbly but it did make the sides look better when I had finished.

My second row was all trebles, one in each stitch of the previous row, in raspberry. At the corners I did a granny triplet of trebles separated by a chain space in both the plum and raspberry edging rows. At this point I decided my blanket was still way to wonky, so I steam blocked the whole thing, which did make it look a lot more shapely.

Originally I had thought about putting granny squares all the way round but decided on just edging the two long sides like this.

At this point, I pulled the yarn end from the start of the square as tightly as I could to close up the central hole.

The second round of the square involved making four corners into each of the chain spaces. I did three chains and 2 trebles, chain space and three trebles followed by another chain space four times and then joined with a slip stitch and fastened off.

After making the first square, I used the join-as-you-go method to create a long strip of granny squares as I went along. 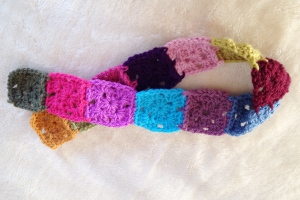 On the second round, in the second corner, I held the new square in progress to the last square already on the strip, wrong side to wrong side. I then made a double crochet into the chain space in the corner of the square on the strip. Most methods use a slip stitch but I liked the effect of a double crochet. You can find out more about how to join granny squares with these really good You Tube tutorials.

Returning to the square in progress, I did three more trebles to complete the corner. Instead of making the next chain space, I made a double crochet into the chain space in the middle of the previous square. I followed with three more trebles to start the next corner of the square in progress and then added a final double crochet into the corner of the previous square.

After three more trebles to complete that corner, I made a chain space and carried on to complete the fourth corner of the square, joining with a slip stitch and fastening off. I weaved in the ends of each square before attaching the next. Joining the granny strip to the blanket

Before I started joining I had to find out exactly how many granny squares I needed. To do this I attached the granny strip (about 30 squares long at that time) to the blanket using stitch markers to see how many more I needed to do. I added them with the stitch markers in place until I had reached the end. This took 36 little granny squares along each of the long sides.

All the stitch markers then had to be taken out to free each strip as I wanted to crochet along each side before attaching it. My granny strip border consisted of a row of half trebles, with a treble decrease at the junction of each square. The edging on one side was gold, with bright pink on the other. I stopped flush with the end of the last square, which I lined up with the end of the raspberry edging row on the blanket

This joined the strip very securely and gave a very pleasing ridged effect at the junction, which gives the blanket a bit of extra texture. I am sure there are other, probably more technically correct ways to do this but I tried it and liked it, so that’s what I did…

My final step before edging the entire blanket, stripes and squares, was to go along the top and bottom of the blanket with a row of half trebles in gold. This went around the bottom of each of the last granny squares, giving me a good foundation for my final edging. This shows up best in this photo of the finished blanket corner. Once the entire blanket was surrounded in a row of gold, I changed to copper and did another row of half trebles. I made two half trebles in one stitch, missed a stitch and so on. I then repeated this, making a row of half trebles in petrol, doing two stitches into each of the spaces below. My final edge of the edge was in my favourite cosy colour, claret. Going into each of the spaces between the two half trebles below, I made one double crochet, 2 chains, and another double crochet into the same stitch. For the corners I did two lots of stitches with a chain space for the copper and petrol rows.

I just did two sets of stitches for the final claret row. The final effect is a really rich, jewel-like neat edging that brings the blanket together. 4 thoughts on “Cosy stripe blanket on the edge”