I'm currently working on a webshop but this won't be live until April 2021. Please click on my Etsy tab to shop Dismiss

In the world of crochet, blocking seems to be quite a misunderstood thing, controversial even. Some crocheters advise blocking everything, others never bother. Some think that only pure wool items can be blocked but that blocking acrylic crochet blankets is a pointless waste of time.

Well, faced with a definitely wonky-looking Attic24 crochet along blanket after I had finished my last stripe, I had to do something. So I investigated how I would go about blocking acrylic crochet blankets. The aspects of my wonky blanket that concerned me most was the really wobbly edge on the left short side. This is the first part of my blanket, where I started and I had done the foundation chain loosely with a hook that was 2 sizes up from the one I used in the main blanket. I was also worried about the wobbles along the long edge, which look like uneven frills.


After posting this pic on Facebook I got even more worried. Had I made each row even? Did I have more stitches on one side than the other? Eeeeeeek.

Is my Attic24 CAL blanket a rectangle?

Even though I had religiously counted each stripe to make sure I hadn’t gained or lost stitches (I was working to 183 across each stripe), I was still worried and spent ages counting the stitches in my border on each side. The two short sides matched, then so did the long sides. So it couldn’t be anything too drastic.

As the shape on the older part of the blanket is more distorted than the end I’ve just finished, I think it must be just that the earlier part that I did has relaxed more and got stretched about was I’ve worked on it. Towards the end, because its been cold, I was almost wrapped in it as I worked.

Going back to the controversies about blocking, this was the first question I had to answer.

I know that Lucy of Attic24 steam blocks her Stylecraft things, so I did a bit more research. Yes, acrylic items can be blocked, but they don’t retain their shape if you just pin them in place, spray them with water and then leave them to dry for 24-48 hours. This is the standard method for blocking knitted and crochet items made from yarn that contains wool.

The reason it works is that wool is a natural fibre and it tends to shrink when it gets wet. Only a little, but the wetting and drying process fixes the wool fibres in their new position.

With acrylic, you need to use steam not because of the water, but because of the heat. The synthetic fibres in the yarn get fixed when they are heated and then cool down again. Lucy’s method is to use a steam iron, moving it over the item that has been pinned in place on an ironing board, with the iron about 3cm above the crocheted fabric. Not closer, because if the iron touches the acrylic yarn, the yarn melts and all your hard work is ruined.

How I decided to block acrylic crochet blankets

My second question was, if I am going to block a blanket, how the heck can I do that? I sat and did a few border squares and gave this some thought. Then I got going again…

My first step was to put the blanket on a carpet and see if I could smooth it out to see exactly how wonky it was. I am sorry for the quality of these pictures – but I was doing this at 10pm last night and the light bulb the room where I was is very yellow…

There are no pins in the blanket at this point but I have smoothed it out and used the pattern on the carpet to line up the edges. (I hate this carpet – it came with the house – so its good to find it was useful for something.)

I then spent about an hour tweaking it and pinning down the edges, not stretching the blanket but just gently teasing it into as perfect a rectangle as I could. 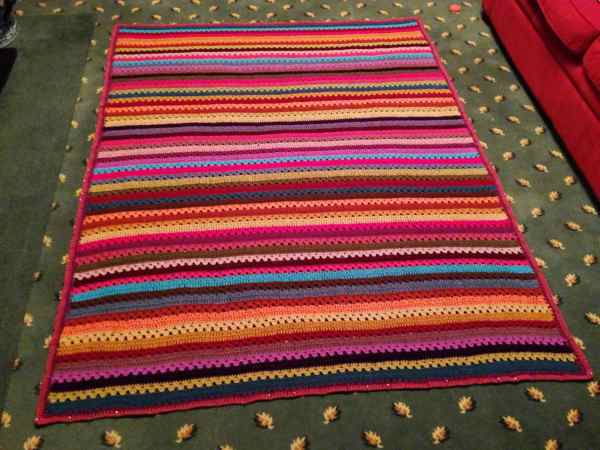 Despite the terrible light, this is a great improvement. I have no pictures of the blocking process but I can describe how I did it:

Then I put the iron away, turned the light off, closed the door and went to bed.

After blocking my acrylic crochet blanket

After unpinning the blanket this morning I took it up to the hard floor in my office for a test photograph. It has definitely improved. There are still a few ruffles around the edging but I am putting quite a deep edging on the blanket and I think these will smooth out as I go. I also worked out that the blanket shape looks distorted in photographs because of the way the iphone takes the pics. The blanket is lined up with straight things around it and that bottom right hand corner is perfectly in line, even though it looks like its a bit out of shape.

I am going to work on solving the ruffles as I do the border. A good tip someone on Facebook suggested was doing rows of the border alternately on the right side then the wrong side to help the border and blanket edge to lie flat. I will try that once I have finished the strip of colourful squares that I am putting along the top and bottom of the blanket. After all my faffing with the blocking the blanket does fold up better… the edges line up and it looks much neater.

Although the main part of the blanket is finished, and its looking in better shape now, I still have a lot of work to do with the border. I really would now like to finish the blanket for Christmas though – a real achievement to have done it in the 6 weeks between my birthday in November and Christmas Day!